The Spaceguard survey: Discovery statistics at the end of 2004

The NASA Spaceguard survey is officially a 10 years program aimed at discovering 90% of the 1km sized Near Earth Objects, eventhough we don't know exactly how much this number is. This size threshold was chosen because it is estimated to be the smallest size of object able to produce global consequences on Earth (i.e. not only around the impact zone or continent).

I have compiled this page in 2002, 2003, and this is the third one, 2004. I simplified it, giving only the statistics of discovery. You can find maybe more information on the other pages.

The data : in the first week of January 2005, like I had done in the past years at the same time, I uploaded 3 files from the Minor Planet Center web site, i.e. the Amor, Apollo and Aten files, kept only the useful data (i.e. removed the headers and footers of the page, juste keeping the numerical data), removed the few objects already discovered in 2005, then merged them in a large text file, which I later used in Excel and Kaleidagraph (another data processing software available for both PC and Macintoshes).

- Apparent magnitude is a measure of the apparent brightness of a given star, and in this context asteroid. It depends of the object size, its albedo (coefficient of reflection of the light), its distance to the sun and to the Earth.

As far as the discoveries, most of them have been done by the LINEAR program, which started observing in 1998. Second comes the pioneer of all these programs, i.e. Spacewatch, with JPL's NEAT following, then Lowell Observatory's LONEOS program and Catalina Sky Survey. 309 discoveries were credited to all other discoverers, except a few individuals who have done a large contribution, like Carolyn and Gene Shoemakers and the many different helpers, Eleanor Helin and her helpers at the time of Palomar, and Robert Mc Naught et al at Siding Spring Observatory, at the time when Australia had a southern hemisphere discovery program. 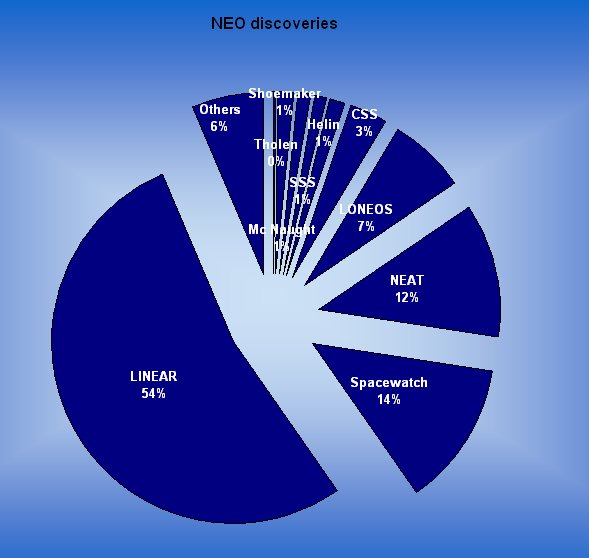 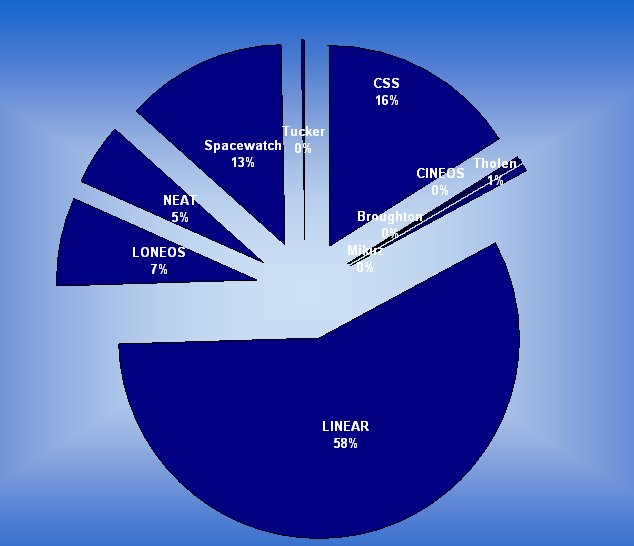 One can see that LINEAR still leads. Then the Catalina Sky Survey, then Spacewatch.

Another interesting discovery statistic is the distribution of discoveries versus the month of the year : 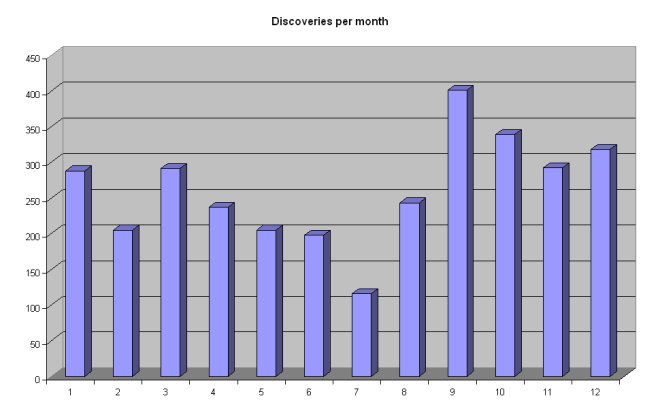 There is more than a factor of 3 between the number of discoveries made in July and September. The drop of discoveries in July and also August is caused by the generally poor weather in New Mexico and Arizona during these monthes. The surge in September can be explained by the fact that a substantial portion of objects "missed" in the summer are caught later. It would be important to check this by looking at individual objects discovered in September (to see if they were already visible/"discoverable" during july and august), but it is a likely explanation.

This is the repartition of discoveries in 2004 : 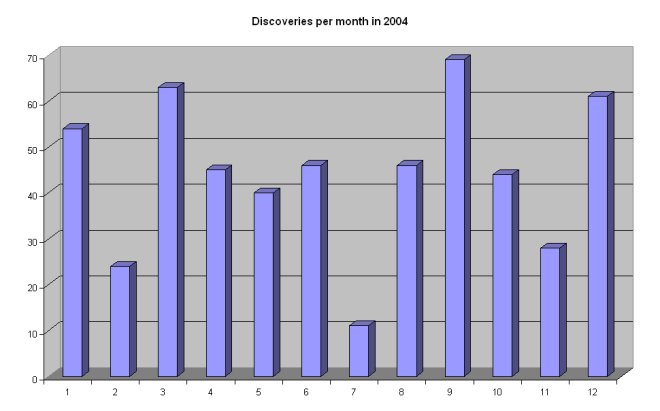 This evolution has been mainly driven by the number of active search telescopes. It is apparently also affected by the meteorological conditions (good years, bad years...). It is very difficult to establish a model for the efficiency of search telescopes. The same telescope, used in a different manner (exposing more time to get deeper for example) would not discover the same number and the same brightness class of objects. 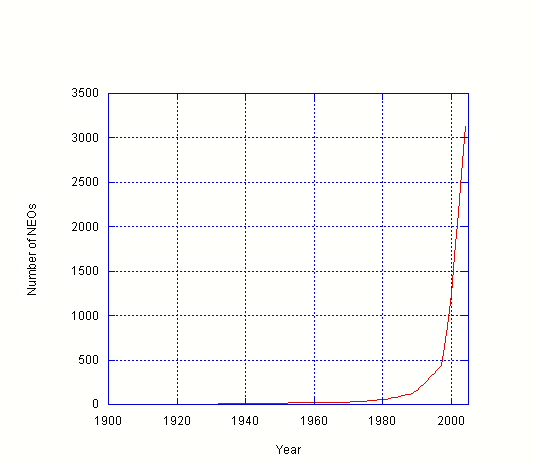 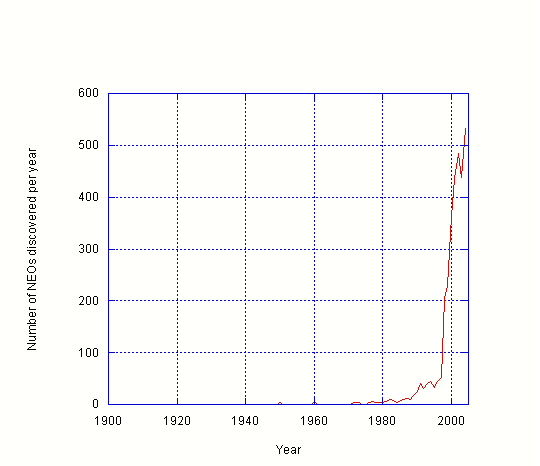 The fact that less objects have been discovered this year is caused by the fact that 3 out of the 5 surveys stopped operation during some months of this year to upgrade their systems (NEAT, Spacewatch and Catalina).

Before 2003, the curves of magnitude 16, 17 and 18 were almost parallel. Last year all of them went down because of the smaller activity on NEO searches (several surveys stopped during the year). This year despite the larger activity, it seems to be clear that less bright objects were discovered, meaning we are starting a trend which should bring us to 0 one of these years. Still the fact that we found more magnitude 15 objects than last year may mean we will have to continue several years before this moment.

Apart from a stable magnitude 20 detection, all the others have benefited from the larger and deeper activity.We have detected twice as many magnitude 24 objects than last year.

same remark for magnitude 25 and 26. The detection of fainter object is caused by their random approach to the Earth, with the small telescopes currently used, we are not detecting these objects very far from Earth.

Here are the cumulated number of asteroids discovered since the beginning of the Spaceguard Survey per magnitude class.

Here is the cumulated number of asteroid of magnitude <18 discovered during the Spaceguard Survey 700 asteroids so far and counting.