The Spaceguard survey: Discovery statistics at the end of 2007

The Spaceguard Survey started officially in 1998, so 2007 marks its first ten years. At the end of 1997, we had discovered 447 near earth objects. End of 2007, 5052.... The sample of known NEOs has grown by a factor of more than 11. We are I believe relatively far from the original goal of 90% of 1km diameter asteroids discovered, but it is not too relevant in a way. We can only hope that the coming 5 or 10 years will see this goal achieved, and also an increase in the telescope size used for this project, in order to multiply again the rate of discovery. This program has been made with what was available, as far as telescopes (all the spaceguard telescopes are old, eventually modified telescopes), and people (well, the people too are old and have been modified :) ).

The data : in the first weeks of 2008, I uploaded 3 files from the Minor Planet Center web site, i.e. the Amor, Apollo and Aten files, kept only the useful data (i.e. removed the headers and footers of the page, juste keeping the numerical data, removed the objects already discovered in 2008), then merged them in a large text file, which I later used in Excel and Kaleidagraph (another data processing software available for both PC and Macintoshes).

- I will not explain what Apollo, Aten and Amor mean.

646 NEOs have been discovered this year. 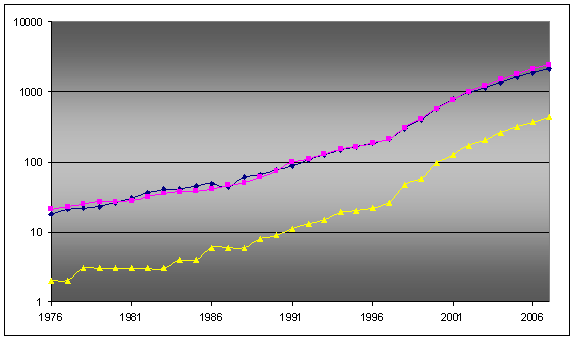 As far as the discoveries, most of them have been done by the LINEAR program, which started observing in 1998. LINEAR passed this year its 2000 NEO discovered !

Second comes the Catalina Sky Survey program then Spacewatch, NEAT and LONEOS. 342 discoveries were credited to all other discoverers, except a few individuals who have done a large contribution, like Carolyn and Gene Shoemakers and the many different helpers, Eleanor Helin and her helpers at the time of Palomar, and Robert Mc Naught et al at Siding Spring Observatory in the early 90s. 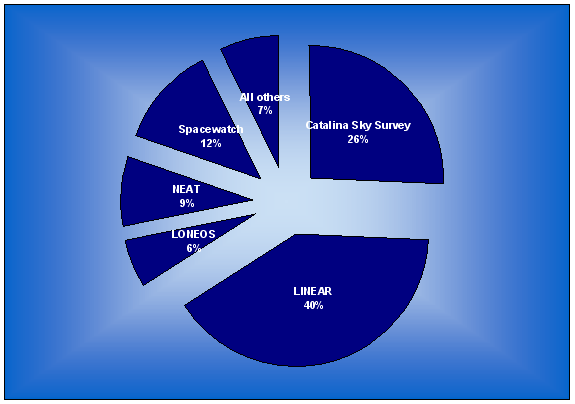 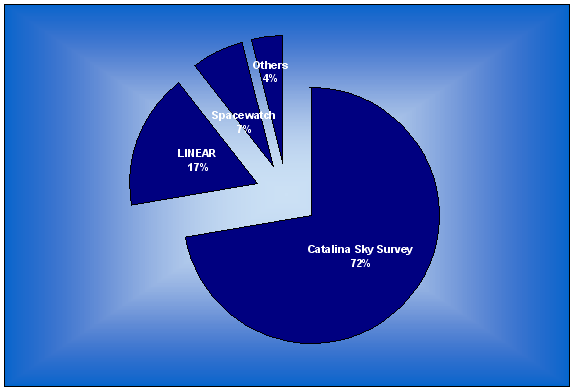 One can see that Catalina is the largest program and by far with almost 72 % of the discoveries this year (466 asteroids), then LINEAR (111), then Spacewatch (44), LONEOS (12) NEAT (4) and other, mostly amateur sky surveys with 1 NEO discovered each (Batters, Lulin, Balam, Tholen, Ferrando, Maticic and Bickel).

One can see the evolution of the number of discoveries per year and per program. I summed all the discoveries made at Palomar (obs codes 675, then 566 then 608 then 644 ). 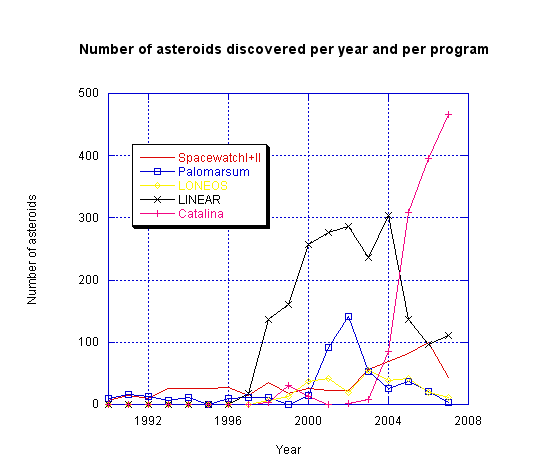 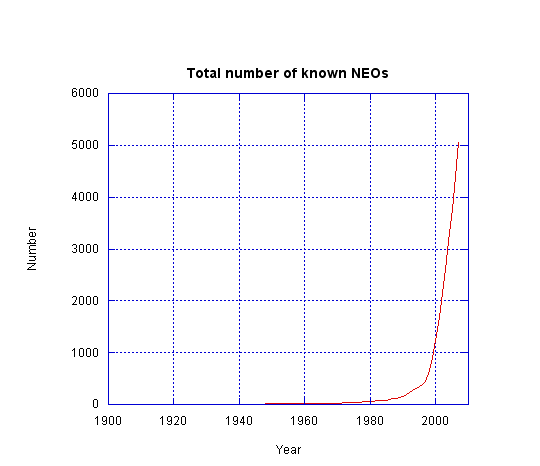 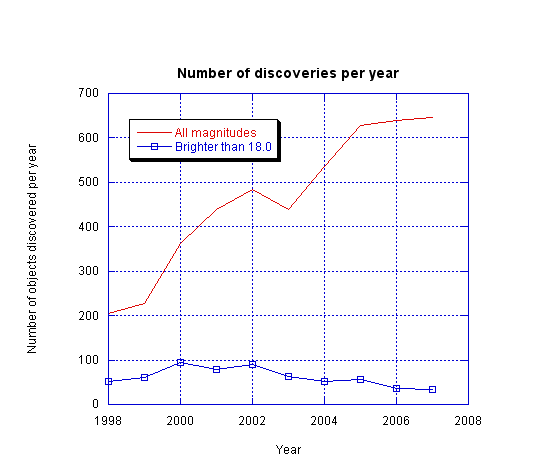 One can see that eventhough Spaceguard is finding more and more asteroids, it is finding less and less objects of less than 1km diameter. The average number of brighter than mag 18 asteroids is now at about 35 per year. If there are 1100 such asteroids, and if we want to discover 90% of them, i.e. 990, knowing we have already discovered 835 of them (i.e. missing another 155), at the current rate it will take 5 years, unfortunately this will not be the case ,the number will get lower and lower with time, and we can count that it will take another 10 years to finish the survey, verifying the 90% law engineering : 90% of a project take 90% of the time, and the remaining 10% take another 90%.

Of course this is not taking into account any larger telescope which could start surveying the sky. As we can see in this diagram, the number of NEO discovered per year has remained more or less constant in the last 3 years. I believe this is not related to the number of telescopes, but more to the diameter of the largest telescope available. 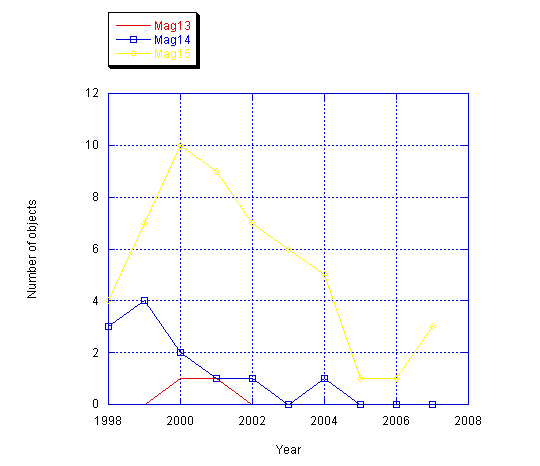 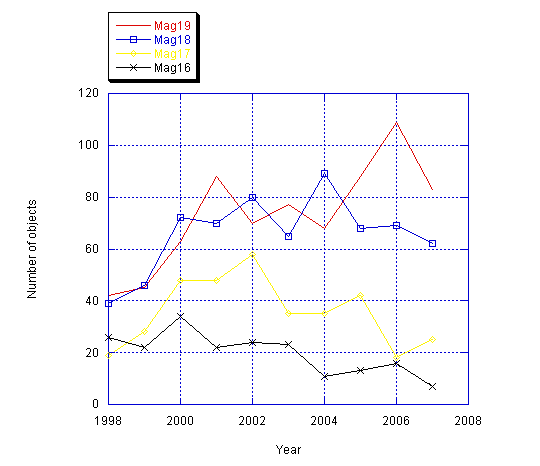 Discovery of magnitude 16 and 17 objects are decreasing but slowly, 18 and 19 more or less constant. 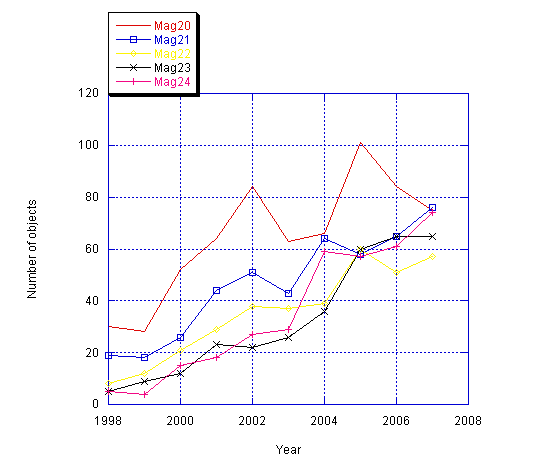 Here we see that we keep discovering more and more of the fainter asteroids. 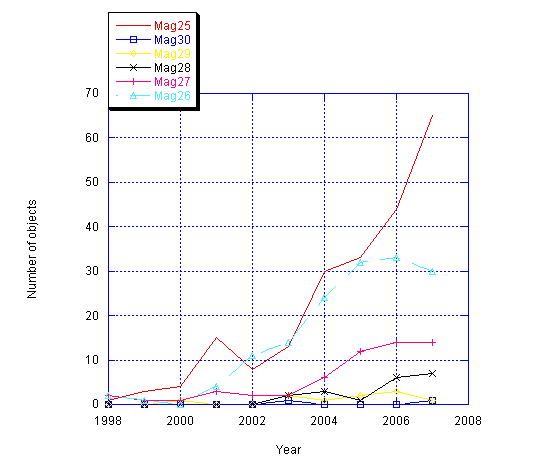 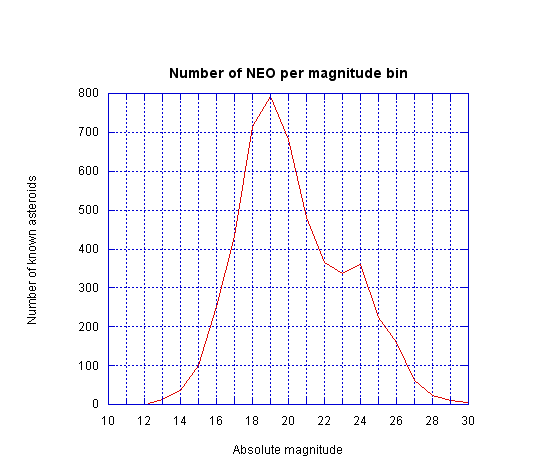